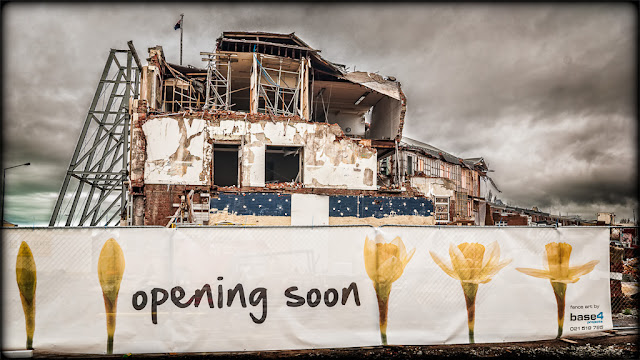 Seen while wandering the edge of Christchurch's "red zone".  It was quite a professional (and presumably expensive) banner, but it's positioning did leave something to be desired.

Made with Lightroom and the Photoshop alternative "PhotoLine". PhotoLine is a professional (Windows & Mac)16 bit image and vector graphics editor which beats Photoshop in many ways, and concedes little to its heavyweight competitor. Oh, and costs just 59 Euros - beat that Adobe!
Posted by David Ford at 5:59 PM No comments:

I have always been a staunch opponent of software piracy, but sometimes you hear stories that make you question your own ethics. Such was a coffee shop encounter with a casual acquaintance I will call ‘Jim’. The coffee was a sort of confessional as Jim had just become a software pirate, quite late in life. Jim’s story went something like this:

He needed a copy of Photoshop made by Adobe. He went to their website and found that it would cost him US$699 (NZ$875). A little steep, he thought but, if that was the price, he was willing to pay. But before doing so he thought he would check pricing elsewhere and found that Amazon had it for sale at US$585 (NZ$785). Sweet, he thought, and pressed Amazon’s ‘One click’ to purchase. Unfortunately, Amazon said they could only download the software to customers in the US. Dam. Why?

Back to the Adobe Store he went, with credit card in hand to pay the full whack of US$699 but his transaction was refused – because he lived in New Zealand. Uh?  Adobe directed Jim to their New Zealand store – where he was told that a copy of CS6 would cost him AU$1,062. Now 1,062 Australian dollars was going to set Jim back about NZ$1,400 a far cry from the NZ$785 that the Amazon shop would have charged or even the NZ$875 that Adobe would have charged in the US store. WTF?

It seems that Jim had stumbled across the price gouging practices that Adobe employ outside the US. Adobe claim that it’s justified because of the cost of doing business in those countries. But Jim just wanted a download and there’s no way that would cost Adobe more in New Zealand than it does in the US.

Jim was incensed. Incensed enough to spend a few hours trawling the web, reading about Adobe’s pricing practices and coming to the conclusion that they are nothing short of unethical.  Jim was also incensed enough to find out what a ‘torrent’ was and how he could download an unlicensed copy of Photoshop. And this was someone who regularly paid voluntary donations to developers of ‘free’ software that he liked.

As I look back on that conversation, it amazes me what happened that day; Firstly, Abobe and its agents (Amazon in this case) turned away a buyer who was willing to pay US$699 dollars - the same price any American would be charged.  They did this because Jim was a New Zealander (or at least not an American). Americans are charged NZ$875, New Zealanders NZ$1,400 for exactly the same product – that’s rampant and unjustifiable discrimination.

The second thing that happened was that an otherwise honest man became a software pirate because, in his mind, if it was good enough for Adobe to rip him off then Adobe just made themselves fair game in the rip off stakes.

It’s a sad tale on many levels, but it made me wonder how many pirates there are that would pay the price - if the price was fair? I own two fully licensed Adobe products but I’ll certainly be looking much more carefully at the pricing next time around. Perhaps you should too.
Posted by David Ford at 9:02 PM No comments:

Out the back of Amberley there is a rather pretty church - an ideal location to check out the latest lens - a Nikkor 18-35mm. I bought it with a view to moving up to an FX camera later in the year so right now it's an FX lens on a DX body which has the distinct advantage of cropping out a lens' most vulnerable areas - the corners. On the D80 I'm getting excellent sharpness right across the frame - even wide open. Nice. 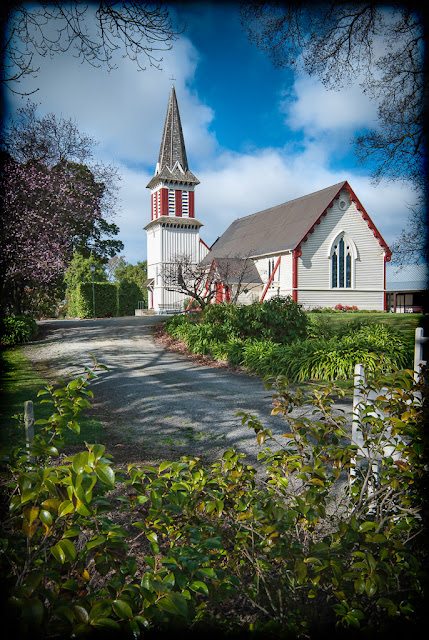 Posted by David Ford at 8:18 PM No comments:

You will fail ... unless

Just today, I finished reading "The War of Art" by Steven Pressfield. So, it must have been coincidence that tonight I hear the same message in a totally different format - a funny/blunt TED talk by Larry Smith about why you will fail to have a great career. Funny enough to watch even if you have already made those choices that lead to failure.

Posted by David Ford at 9:45 PM No comments:

Is there something in your life that you are as passionate about as Stephen Ritz? Whether you are interested in the Bronx and disadvantaged youth or not, this is worth watching just to see the energy and passion spewing out of this man. Just watch it. Now.

Posted by David Ford at 9:12 PM No comments: