Walk in the Gorge

I love this time of year, and I love this place; just before the Ashely completes it's dash through the hills and starts to spill out on to the plains.

It's ten-thirty when I start my walk and the sun still hasn't crested the sides of the gorge. A muted light filters through the Autumn leaves and a carpet of orange covers the path - still wet from last night's rain. The bell-birds chime heralding the coming sun and I head on up, hoping to meet the sun coming down. 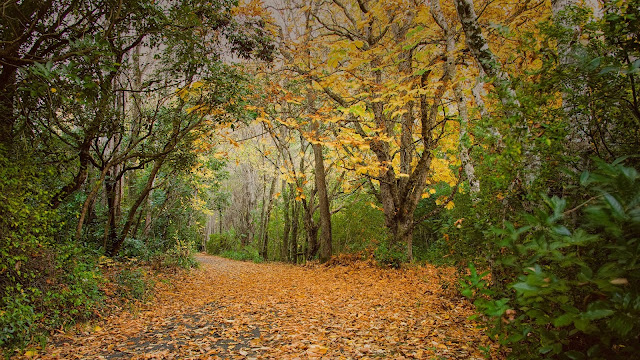 Those extraverted poplars have already stripped off. While others, more bashful, are still slowly undressing. Across the river the modest evergreens watch on; shocked perhaps by this display of deciduous daring. 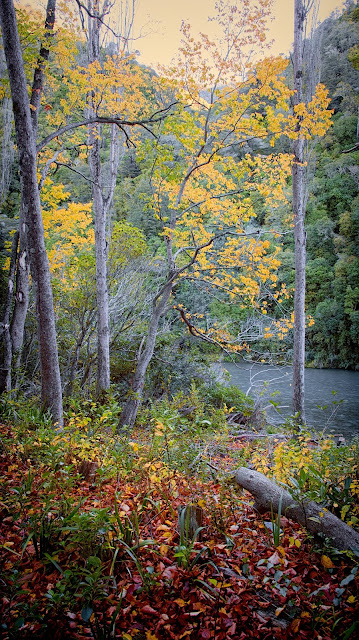 Further up I find the sun shamelessly playing among the leaves like a five-year-old in gumboots. I busy myself looking and composing, carefully capturing the light before it moves on. Only later wondering why I didn't pause to let my boots kick through the pile of leaves; to wind back the clock sixty-five years ... 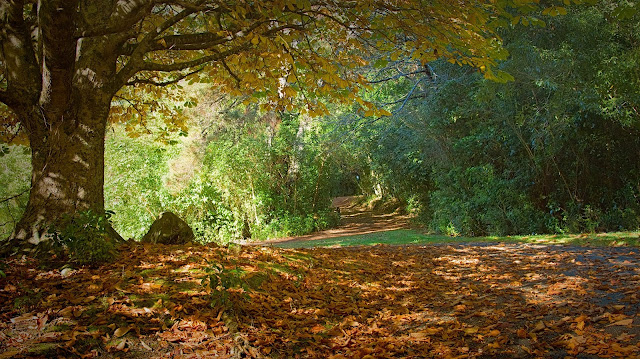 ... But I think I know why; alone here with only the sun, the birds, the half-naked trees, there's a quiet magic in the air, crackling like static, demanding that the spell not be broken. There is nothing I can add to this. It is gift. 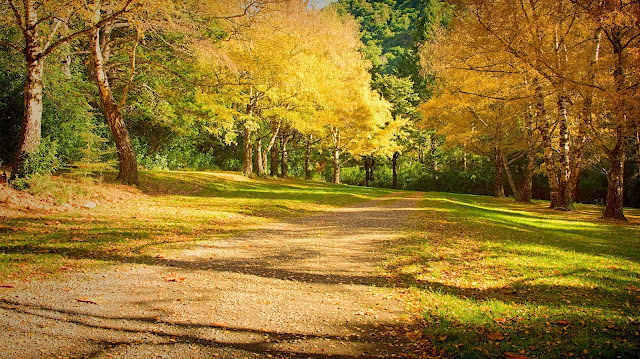 Posted by David Ford at 8:38 PM No comments:

So, a whole year of daily Gemini PDA usage; time for an update.

Planet Computers'  Gemini PDA has been my sole phone, communications and portable computing solution for a whole year. In that time, it has met my expectations and more - I am well pleased with my purchase. But there are some qualifications, largely in software, support and Linux. But first, the hardware: 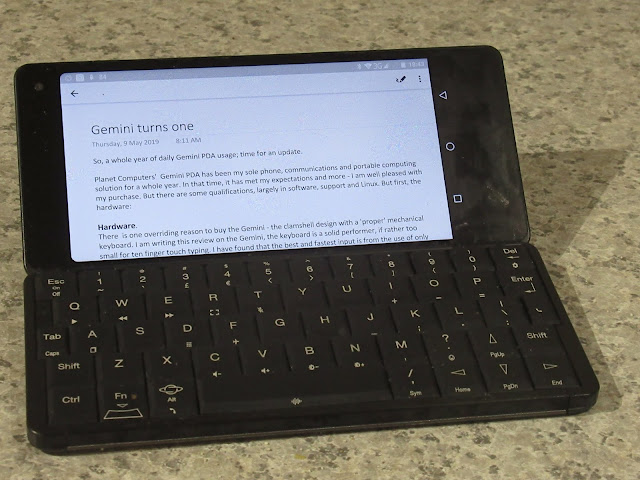 Hardware
There is one overriding reason to buy the Gemini - the clamshell design with a 'proper' mechanical keyboard. I am writing this review on the Gemini. The keyboard is a solid performer, if rather too small for ten-finger touch typing. I have found that the best and fastest input is from the use of only three or four fingers and thumbs. It's not touch typing but it achieves the best balance between speed and accuracy and makes the Gemini keyboard a joy to use.

The clamshell design has stood up well to many openings and closings every day and seems to perform just as well as when it came out of the box. My only criticism being the sharpness of the metal edges around the closure points (once bitten, twice shy). The case has worn well and, although it is obviously not new, it is free from any major scratches and blemishes, despite sharing my pocket daily with sundry other metal objects.

Other users, however, have reported issues with cracked hinges and less than optimal keyboards. It is hard to pin down the reasons for this - perhaps there is manufacturing variability and perhaps differences in how the device is handled. I can only report on my own experience, which is very good.

Software
Planet Computers software is another matter. Notes, Data, Agenda, Airmail as well as a number of utilities come with the Gemini. Personally, I don't think that Planet Computers have the resources necessary to develop good software. The applications tend to be clunky clones of old Psion software and in my view are, quite frankly, best avoided. Fortunately, there are many Android apps to choose from which perform very well on the Gemini, and much better than the Planet versions.

Many people bought into the Gemini on the promise of Linux compatibility. They have been mostly disappointed. Linux is available on the Gemini, but it is reported as awkward and incomplete (I don't use it myself). Having previously spent a lot of time with Linux, my feeling was, and still is, that Linux is largely for hobbyists,  hackers, servers and black-box systems. If companies like Canonical struggle to produce an open-ended, consumer-grade Linux OS, then there is no hope for a little company like Planet Computers. Try Linux if you like tinkering, otherwise just stick with Android.

Mostly, Android runs well on the Gemini. But Planet seems to contract out their Android integration to a less than wonderful company. Android updates are best avoided on first release. Expect to wait a couple of weeks after release, until other (braver) users are reporting that it updates and runs ok. While my Gemini runs well on Android, in the last year I have also experienced loss of functionality on the silver button for several weeks and Google Maps ceasing to operate for a while. These were addressed eventually, but I won't be rushing to update to Android Oreo until I hear that the road is clear.

Support
Planet Computers suffer from poor communications and patchy support. They let issues fester before making any public statements about them (Apple do this too). They over promise on dates and regularly under deliver. Support seems spotty; some users report being very happy, while others can't get any response at all from suppport. All this could be put down to Planet Computers being a startup. But, two years down the track, things should be getting better and there is no evidence that it is.

If you are likely to need hand-holding or have high expectations of any company you do business with then you may want to avoid Planet Computers - at least based on current evidence.

Conclusion
I like my Gemini. It fits my style of working perfectly and is the natural successor to the Psion PDAs and Nokia Communicators of the early 2000s. I have the next version (the Cosmo Communicator) on order so that should tell you how pleased I have been with the hardware. Would I suggest it for my non-technical family members? Probably not; it does occasionally require some basic troubleshooting to deal with, or work around, a software issue. If you aren't comfortable with that then the Gemini might be best avoided.

To keep things in context; there are some downsides (mainly software reliability) but for me, they are outweighed by the considerable upsides - it fits my lifestyle and, quite frankly, there is nothing else available that can come close to replacing it. I hope that the Cosmo Communicator is at least as good as my Gemini.

Posted by David Ford at 7:22 PM No comments:

Since the last post, Annette and I have had a small holiday and I have turned a vase. We tend to take small holidays - just a few days at a time - long enough to see and do something different, but short enough not to miss the familiar comforts of home.

A few hours drive got us to Mosgiel, near Dunedin where we had a comfortable eco cabin in the middle of nowhere. We were last in Dunedin when Bethany was having her spine straightened (about fourteen years ago) so a visit was well overdue. While there, we took the train up the Taieri Gorge and the Queen of Hearts found her throne at Larnach Castle. 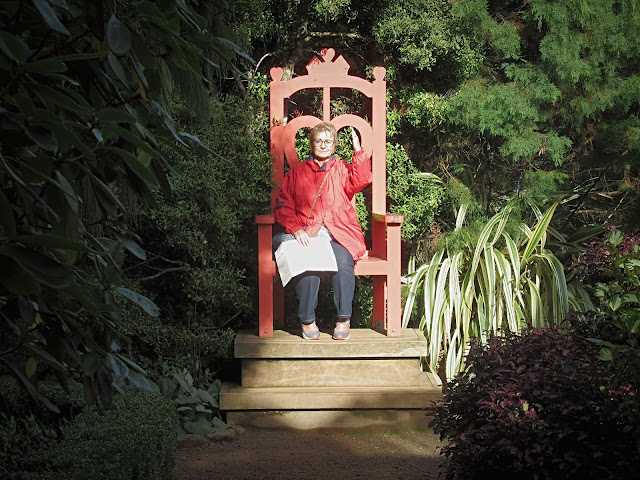 The Otago Settlers Museum was well worth a visit and is a very affordable family venue with plenty for young people to see and do as well as a remarkable zero entry fee. We also enjoyed mooching around the railway station - a remarkable witness to the affluence of Dunedin in the 1900s. 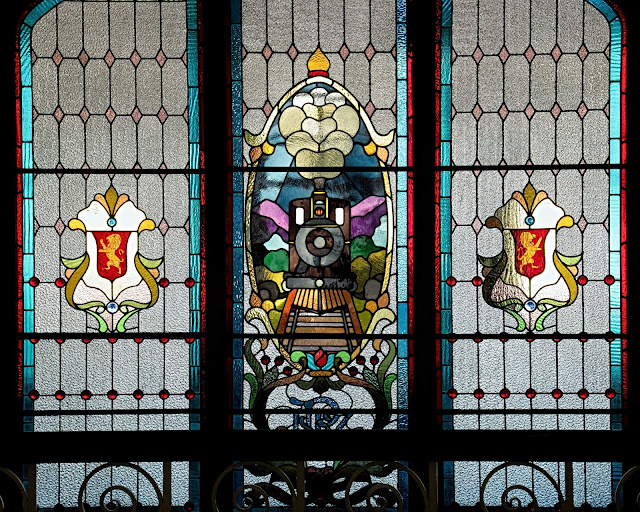 Dinner with the Dunedin Prattleys rounded off the trip and the next day had us heading North towards home where, back in the shed, the lathe awaited a fresh piece of wood. Which, eventually, gave birth to this Kwila Vase. This is my second Kwila piece and I really like this timber - it is very heavy and coarse-grained, and working it feels almost like turning soft metal rather than wood. 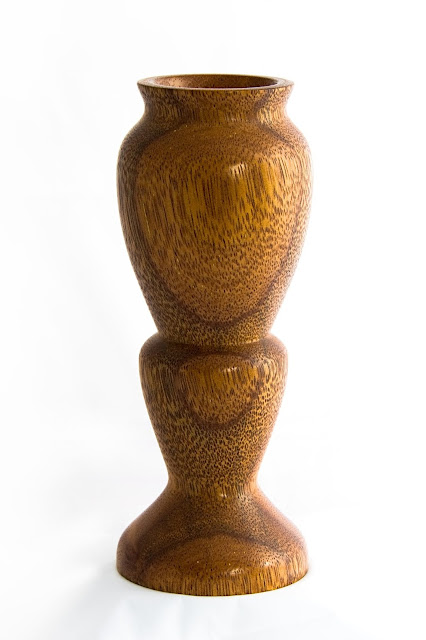 When it's all stripped down, life is an adventure. Whether its a road trip, turning a piece of wood, making images, or simply learning something new - it's all one big adventure. I like that. Tomorrow, of course, there is another adventure waiting at the office. (It's true, I tell you. It really is!)

Posted by David Ford at 4:33 PM No comments: