Today I delivered my first limited edition folio to the gallery. Ten art pictures of Lyttelton Port packaged in the Dane Creek folio covers and now on sale at Arts in Oxford.

I've always focused on individual pictures before, but found the process of putting together a themed folio both challenging and rewarding; presenting a new dimension to story telling that goes beyond the individual image.   It will be interesting to see the response from gallery visitors but, regardless of that, I am really comfortable with what I have been able to produce so far and look forward to developing other multi-image projects in the days ahead. 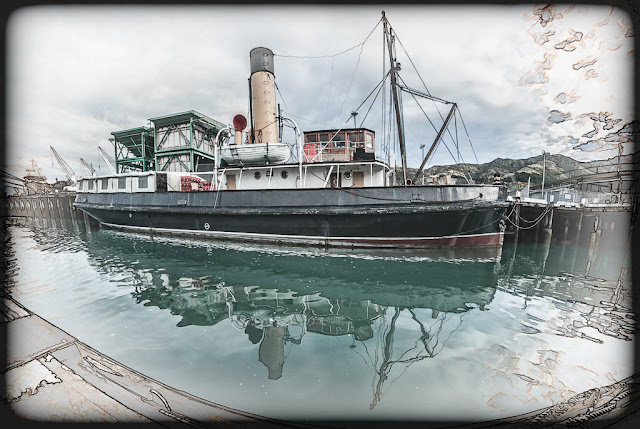 See the rest of the folio here.
Posted by David Ford at 5:58 PM No comments:

As a casual diversion from photography, I sometimes dabble in fractal art. Occasionally a fractal makes it into a photograph as a background to a portrait, but recently I have been toying with fractals as texture. Let me demonstrate:

I'll use the fractal below. It's shown here on a black background so it can be seen easily, but the actual fractal was brought into the photo file as a transparent png (no black). This fractal is suitable because (a) it is soft and lacking in hard edged definition (b) it has a nice warm color. 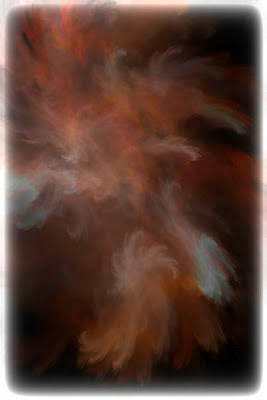 The image I will use is a straightforward church interior with lots of wood that will go nicely with the warm tones of the fractal image. 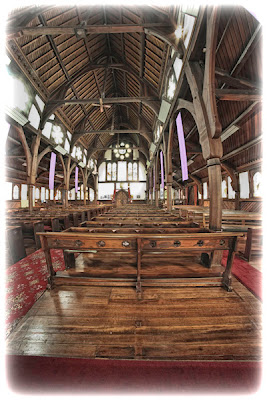 The settings used for the texture layer were mode=overlay and opacity about 50%, settings which produced this final picture: 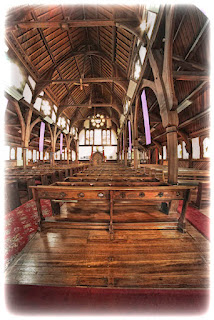 Apologies that the last picture is smaller (Blogger changes it to the original if I try to make it any larger!) What I like about this approach is that it replaces a warming filter, the different shades in the fractal give very subtle changes in luminosity that make the picture more three dimensional, and while its effects are quite visible the fractal its self isn't.

The fractal was generated in Apothysis 7x (a freeware program) and picked out of a randomly generated batch (i.e. no skill whatsoever required :-)

Posted by David Ford at 5:45 PM No comments:


Over the last year or two, I have become rather reliant in my post processing on a set of software filters from Topaz Labs (http://www.topazlabs.com/). These filters encompass everything from noise reduction, through black and white conversion and tonal adjustments to special effects. They are not cheap – NZ$370 for a 10 filter bundle – though sometimes they come up on offer, and I originally brought mine for half that price. They are also available individually for those that just need just one or two filters.

I use Photoshop Elements (NZ$165) and, with Elements and Topaz combined, find no need to pay NZ$1,300 for Photoshop CS5. So, that said, I thought it worth talking about those filters that I especially find indispensable; starting with Topaz DeNoise (http://www.topazlabs.com/denoise/).

I hate digital noise. I also used to hate grain in my prints from film, but some people deliberately add grain to their digital images, so I’m open to the fact that not everyone will hate noise as much as I do. My Nikon does a pretty good job at keeping noise down, but at higher ISO or in pictures with a high dynamic range, noise can still intrude. Nikon’s own software (NX2) and Photoshop both have crude noise reduction algorithms that seem to suppress detail at the same rate as they suppress noise. Topaz DeNoise is different.

When I first used DeNoise, I was so blown away by the clean results I got that two things happened – I got cross at being short changed by the mainstream software providers (not helpful) and I raised my usable ISO ceiling by two full stops (very helpful)! That was simply using the basic presets that came with the tool. Since then, I have learned how to use the controls that DeNoise provides to finesse even more detail from previously unusable RAW files.

Now let me be clear, this isn’t a tool you would want to use to process a thousand RAW files from a photo shoot – that would take an eternity, but for those photographers preparing top quality files for final use in print or even web, its a godsend. Below is a 100% crop from a review picture taken on the Nikon D5100, 16Mp sensor at ISO 6,400. The first frame is from the original RAW file and the second is after a minute in Topaz DeNoise – given the subject matter, quite a usable result. 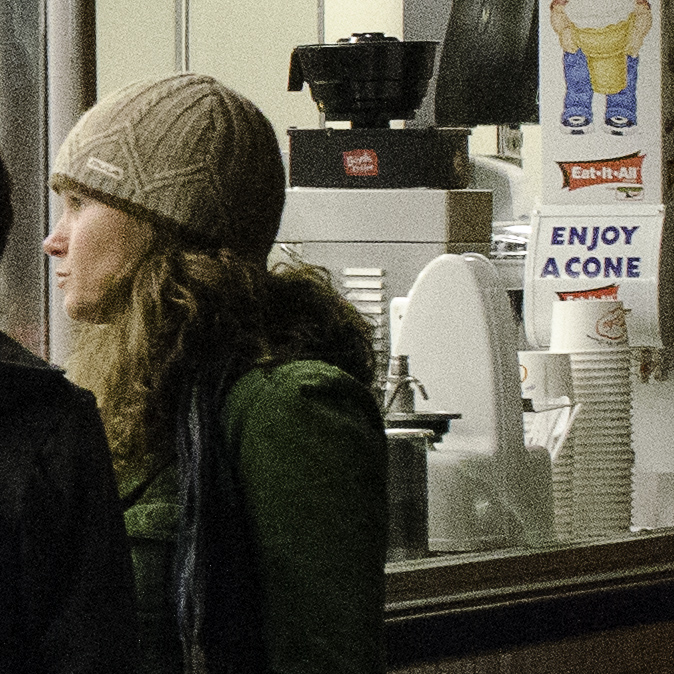 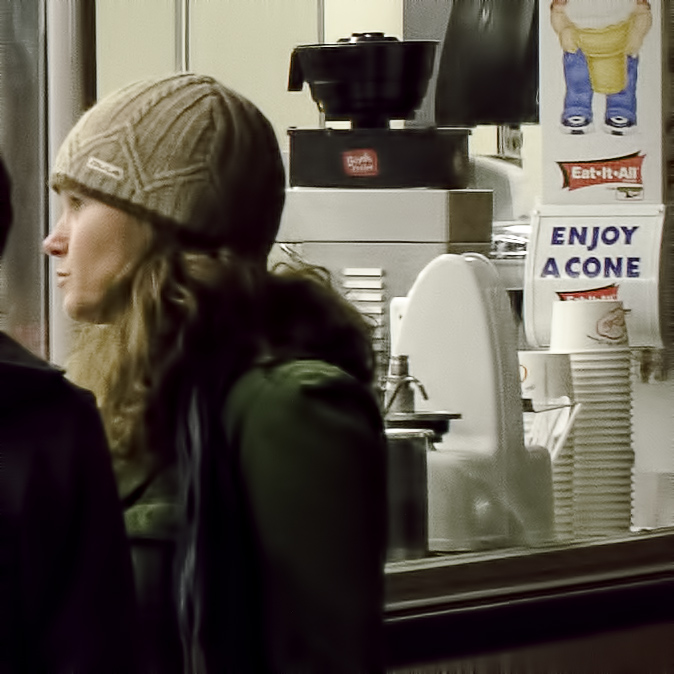 So, that’s Topaz DeNoise and why I couldn’t live without it :-)

Disclaimer: I am just a Topaz user; I have no other relationship with Topaz and have received nothing from Topaz for this review.

It's been a week of experiments with interactive 360 degree photography. It started with a client wanting a 360 degree view of their retail space and ended up with visiting St Michael and All Angels church to see what could be done with a larger interior. The results can be seen at http://www.fords.co.nz/pano/stmichael/start.html. If you do try the link, use the 'full screen' button to see it at large scale; well worth it. 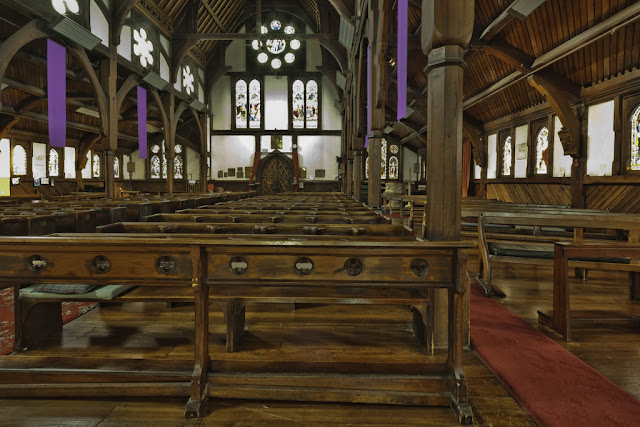 The interior was taken with six fish-eye frames - 5 horizontal and 1vertically upward. I could have taken a seventh vertically downward but didn't bother this time so there is a small black hole in the floor underneath the camera! The six pictures were stitched using 'Hugin' and the virtual reality files were created using 'Pano2VR'.

The resulting image files are quite large to download but the additional quality for zooming in on detail is worth the short wait. The image will display in a browser using either 'Flash' or 'HTML5' if Flash isn't available. Comments welcome.
Posted by David Ford at 4:24 PM No comments:

Many of us go through life experiencing a tension between who we are and who others seem to expect us to be. Susan Cain gives an interesting talk about being introverted in an extroverted world.

Last month our fourth grandchild was born. This is young Rhylee at four weeks old - wide eyed and ready to take on the world. 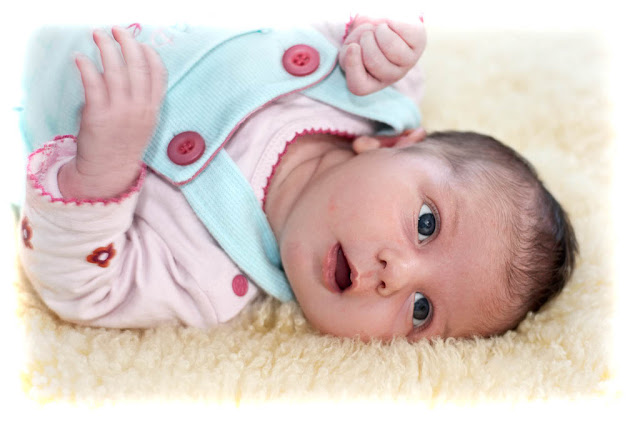