Just some weekend fun in between mowing the lawns and testing out Topaz's latest tool - "Mask AI". So, take some of those fantastic designs shot at the World of Wearable art (WoW) in Nelson - Apply some masking and some imagination and we have "Mythology": 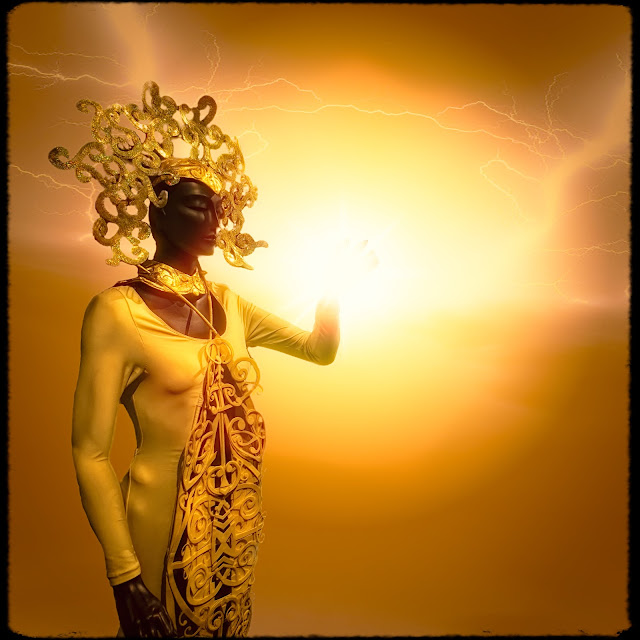 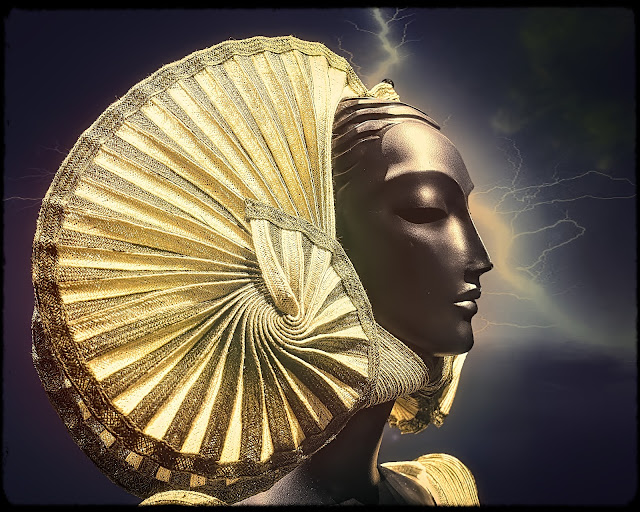 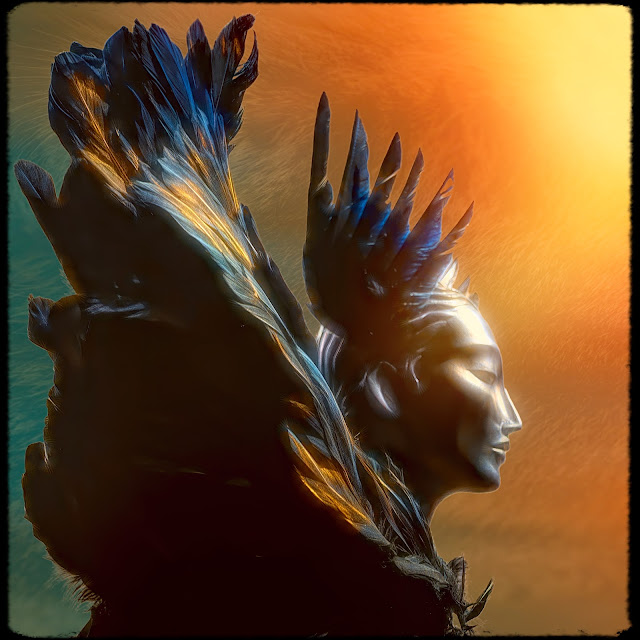 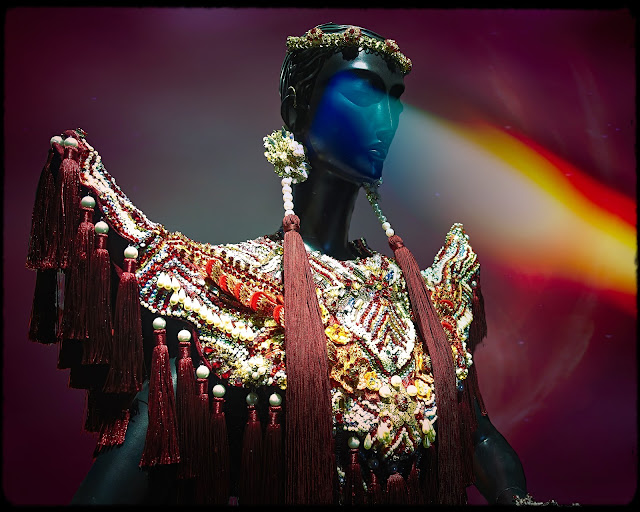 Topaz Mask AI is easy to use and produces pretty good results without a lot of effort. It's an early release so it's not as quick or stable as it could be, but I am sure that will be fixed with some pretty prompt upgrades.
Posted by David Ford at 4:50 PM No comments: Links to this post 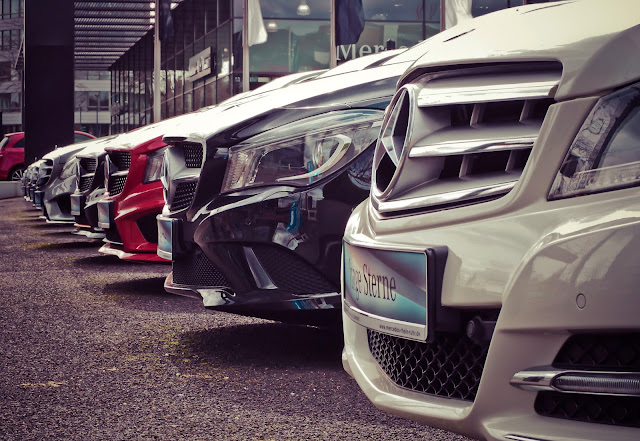 Four years ago, I bought a car (no, it wasn't a Merc). The experience was a pretty good one, the deal was done and I went away happy. Four years later, I am still happy with that experience and its outcome. So, when it came time to make another car purchase, I returned to the same company, though at a car-yard in the next town over. When I went in, the company had a fair amount of goodwill credit - something I alerted them to so that they would know that I wasn't just there to kick tyres. They checked our history on their computer, understood that we were returning customers, and so the discussions began. Ultimately, I left without a purchase and probably won't be going back.

How did we get to this complete reversal? How did the company squander the goodwill they had created last time around? Three basic things come to mind:

1. Lack of preparation: the manager whom I spoke to on the phone the previous day (and who knew I was coming to look at a specific car) wasn't present nor had he briefed the staff that were on duty the day I arrived. Basically, they weren't ready to sell the car we wanted to buy - no one had thought it through and determined their bottom lines.
2. The staff on duty lacked authority to close a deal at anything other than the advertised sticker price. Faced with a high sticker price and a low-ball trade-in offer, there was no discussion to be had and nowhere left to go but out the door. This wasted my time and theirs.
3. No follow-through. Subsequently, the manager totally failed to pick up on the lost opportunity and to see whether it could be rectified or not. No call-back or follow up.

The company's motto is "home of the good sports". Well, I guess they were all out that day and someone else was house-sitting.

I don't care for myself, I can pick up the sort of car I want anywhere, at any time (and I will). But a part of my day job is considering customer experience and how my organisation can cause customers to come back time and again because they went away having had a good experience. In this case, my poor experience caused me to realise just how much a small slip in standards will impact the way I feel about a company. (Thanks for that - you just became a case study.)

In something as ubiquitous and competitive as car sales, the 'good experience' is one of the easiest differentiators for a company to access and yet some of the stereotypical "used car salesperson" attitudes and approaches are still the norm. Quite frankly, this is dinosaur thinking. Regardless of today's commercial realities and difficulties, good customer experience brings purchasers to your door, but one bad experience and they can be gone forever. Staff need the training to deliver that good experience, not just left to 'mind the yard' while the boss is away.

I'm not picking on this company especially - they just happen to have made themselves my experience - but there are plenty of second-hand car dealers that embrase the stereotypical used car salesperson meme. There are also quite a few general retailers that don't understand the impact of poor customer experience on their bottom line. I remember a low-price Australian retailer arriving in town several years ago - I brought a vacuum cleaner from them (at the right price) and have never been back since - simply because the experience of actually making the purchase was so awful. They are still there, shouting at their customers, I am not.

Customer experience matters - and if you have managed to create a good experience, then please don't throw it away on the back of a bad one. Just saying.
Posted by David Ford at 7:40 PM No comments: Links to this post

At last, the perfect camera!

Well, no, actually; we all know there is no such thing, right?

Despite what might be suggested by camera manufacturers, reviewers and even photographers, every camera is a package of many compromises. Even money can't buy you a perfect camera (sorry Leica) because many of those compromises concern the laws of physics and the limitations of manufacturing processes. And let's not even start on the fact that your 'perfect' might not be the same as my 'perfect'.

Nevertheless, as photographers, many of us seem compelled to get as close to gear perfection as we possibly can. Perhaps, we think, it is our inferior gear that is holding our photography back? But what if it's not; what if it is our obsession with near-perfect gear that is distracting us from focusing on the very things that would improve our photography?
I'm a couple of months into an experiment. I want to know what will happen if I leave my backpack of expensive DSLR kit at home and downsize my gear to the fixed lens, point-and-shoot category. Am I crazy? Probably. But there is a method in my madness - I want to travel lighter and spend less time wrangling gear and more time making pictures. Part of my problem too, is that I am both a visible light and an infrared photographer, something that adds an additional complication to my gear-carrying needs.
So, instead of a backpack full of DSLR gear and lenses, I have narrowed it down to three small point-and-shoot cameras: one with a 1" sensor (but limited 'reach'), another camera with a 600mm equivalent lens for nature shots, and another camera set up for infrared work. They all fit into a small shoulder bag with plenty of room to spare. On a recent trip, I found it so much easier to whip out the appropriate camera than to fuss around with DSLR bodies and lenses. I took more pictures, worried less about what gear to use and didn't miss the backpack (or the shot).
Downsizing from a full-frame DSLR would have been unthinkable a few years ago but the quality improvement in cameras and, importantly, post-processing software, makes it possible to produce DSLR-like quality from much smaller sensors. From a quality perspective, I would be confident putting the pictures from any of my three point-and-shoot cameras alongside my DSLR pictures in a photo book or even at larger sizes on a wall.

The Sony RX100 m3: I have had this camera for over four years and still can't see anything in the market which can replace it for my needs. It wasn't a cheap camera but the quality of output is excellent and it can be used in anything from manual mode right through to fully automatic. It shoots RAW but, in my view, Sony have really nailed it with the automated JPG modes on this camera - all these shots were from in-camera JPGs.
The Canon SX620 HS: Some people will slate this camera for being a bland automatic with no manual control. It's smaller than the Sony and with its 24-600mm (35mm equivalent) focal length it is a dream at getting the fleeting nature shot. Like Sony, Canon has also mastered the art of in-camera JPGs, making this an ideal shirt-pocket camera for every-day use.
The Canon Elph 180: The little Elph is the cheapest camera that Canon makes. This also makes it an ideal candidate for tearing apart for an infrared conversion. Like the other two cameras, it has a 20Mp sensor and produces some lovely detailed pictures in good light (which infrared usually is). It has a zoomy lever thingy and a shutter button - not much else. It does the business.
Each of these pictures was taken during a recent four-day trip to Nelson. I took about 240 photographs and made about 90 'keepers' (37% - a very good ratio for me). These aren't the best shots, but they are representative of what each camera produced in differing photography styles. Last time I went away with the DSLR gear, I took 380 shots and produced 55 'keepers' (14% - much closer to my expected average). On that basis, I have produced twice as many keepers using my three small cameras than I did with the DSLR gear.
I've still got the DSLR gear, but it's on notice - at the moment I'm doing better and having more fun with my point-and-shoot cameras.

Posted by David Ford at 8:50 PM No comments: Links to this post