Ticwatch ticks (nearly) all the boxes 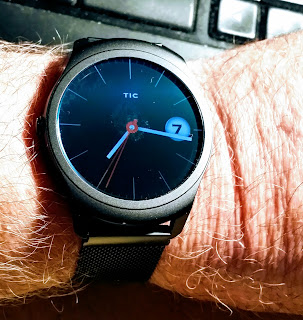 With the untimely death of Pebble, Father Christmas brought me a Ticwatch 2. Ticwatch doesn’t ship directly to NZ yet, so  FC had to hunt around for an overseas supplier who would ship to NZ - he used Amazon (or you could use NZ Post’s excellent “You Shop” service to buy directly from Ticwatch in China). FC also used TradeMe to replace the silicone band with a metal one, effectively making the US$200 watch look like a Ticwatch Onyx (the US$300 model).

The Ticwatch is round, like a classic watch, and available with either a black or white coated aluminium case. It’s light on the wrist, weighing in at about 55g with strap - much lighter than my Pebble Time Steel. Like Pebble, Ticwatch has their own app store. Unlike Pebble, there is nothing worth having in it yet. I brought the Ticwatch for its standard pre-loaded apps; my experience with Pebble being that after the initial surprise of finding that you can run, say, Evernote, on your watch, it becomes glaringly obvious that using it on a watch is like trying to whistle into the wind - an exercise in futility. Most third-party watch apps tend to be a bit like this.

Out of the box, the Ticwatch can tell the time, display notifications, make and receive phone calls (via a paired phone), reply to SMS messages,  count your steps, track a run (or in my case, a walk), measure your heart rate, show calendar entries, show and speak the weather, play music on a bluetooth device, provide both stopwatch and timer, record spoken notes, and do simple calculations. Oh, and call an Uber (or other taxi services) though I haven’t used that yet. That’s not a bad list of functions and is much more than I used on my Pebble.

My only real complaint about the Ticwatch, is the screen. Indoors, it’s a lovely brilliant, 36mm, OLED screen with 287ppi resolution. But, like all LED-based watches, it becomes very difficult to read outside on a bright day - even with the screen set at maximum brightness. Pebble had it right by choosing to use a colour e-paper display - clearly visible on the brightest of days. Right now, however, there are no decent e-paper watches - nearly all manufacturers are using one type of LED or another (though Sony has an e-paper watch in development).

The choice of LED display also impacts heavily on battery life. Whereas the Pebble lasted well over a week between charges, the Ticwatch will last just over one day. This is par for the smart-watch course, but turns out to be less of a problem than I had originally thought - it simply means putting the watch on charge each night - along with the phone. At the end of a 16 hour day, the Ticwatch has between 33% and 48% of the battery remaining (I’m keeping count) - that includes some GPS use and heart rate monitoring each day. As I get used to the pattern of battery drain, my initial ‘range anxiety’ has reduced and I am getting more comfortable with the practicality of a shorter battery life.

The Ticwatch comes with a good range of watch-faces to choose from and more are being added to Mobvoi Store for free download (Ticwatch is made by Mobvoi). These are some of my current favourite faces:

From a style perspective, the Ticwatch is a much more ‘watchy’ looking watch than the Pebble Time Steel and, even after buying a metal band, it’s still a little cheaper than the squarish looking Pebble. In fact, outdoor visibility aside, there’s really nothing to dislike about this watch. Probably its nearest competitor would be a Samsung Gear S2 - a NZ$400 watch that has now been superseded by the Gear S3 at over NZ$600. Mine ended up costing NZ$340 with the metal band. If you are interested in snagging one, the Ticwatch site is here: https://en.ticwear.com and just search Google for “Ticwatch review” to see what others think about this watch.

Goodness, look at the time ... must fly.