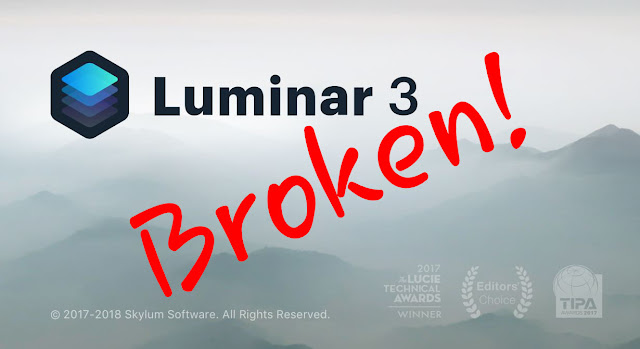 Luminar 3 (a.k.a. "Luminar with Libraries") came out yesterday. L3's predecessor, Luminar 2018, is a capable piece of software on the Windows platform, but Luminar 3 is not.

I had only been waiting a week or so for this release so my disappointment, though heavy, would not have been as soul destroying as those that have waited for over a year. L3 for Windows should never have been released, it's not even ready for beta testing. </opinion>

Installation was a nightmare. It took four attempts to get it installed in a form that would even start up again after it had first been started and closed. And, in case you're wondering, yes I have a reasonably powerful machine (i7) with plenty of  RAM (16Gb) a modern graphics card (2Gb) and disk space to spare - all running an up to date version of Windows 10. I only got L3 working eventually, by limiting the catalogue to about 2,000 images rather than the 60,000 in my library.

When it did start working, it quickly became obvious that L3 for Windows was nowhere near ready for prime-time. </more opinion> The fact that some features were missing is, perhaps, forgivable (software can be updated). The fact that some necessary functions don't work at all is not. There is, for example, no folder refresh - once L3 for Windows has built the catalogue for a particular folder, it cannot be refreshed or updated without closing and reopening the application. That means that no other applications can put files in that folder and have Luminar recognise them during that work session. Not even Luminar its self!

Another deal breaker is that Luminar has no ability to send files to other applications. Any DAM (Digital Asset Manager) must be able to do this and the implementation of this feature can only be described as trivial. For example, my current DAM (ACDSee) allows me to configure any external editors I wish, and the folders update with changed and added files on the fly. This is all base DAM functionality.

There are heaps of missing features that need to be added and some of the existing functions can only be described as "flakey". Did I mention S-L-O-W, very, very, slow? It all adds up to a broken package that isn't fit for purpose. The combination of ACDSee and the previous Luminar 2018 is still a way better overall solution than Luminar 3 on Windows. Shame on you Skylum.
Posted by David Ford at 8:32 PM No comments: