The Galaxy Note came pre-loaded with Adobe's PhotoShop Touch. Adobe has done a fantastic job of shoe-horning what is effectively PhotoShop Elements into a tablet format. Of course, it's not PhotoShop Elements but, feature for feature, it's pretty close, so there is a lot that a user can do with it on the tablet, even down to compositing.

But, and its a big BUT, compared with a laptop or desktop, editing pictures with PhotoShop Touch is like trying to thread a needle while wearing boxing gloves - possible but not recommended. Unless, that is, you also take the pictures with the tablet and need to edit them before uploading to your favourite social media site. In that situation PhotoShop Touch does make some sense, but wether it makes sense for someone who uses a 'real' camera, is another matter entirely.

Still, and despite my reservations, PhotoShop Touch is a masterpiece of ingenuity, like getting a ship into a bottle, and I shall keep it around - just in case. 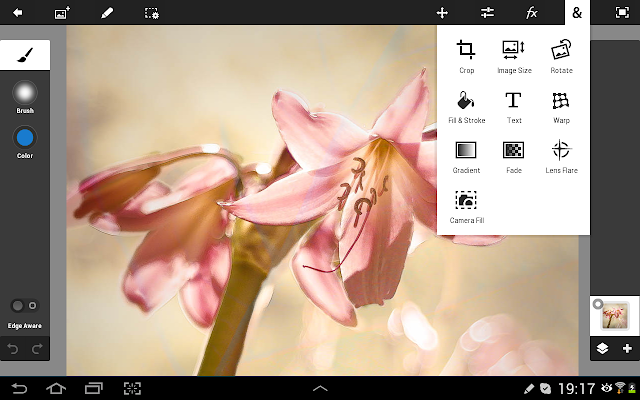