The Maruia Falls have always seemed quite impressive to me; well worth a stop on the way from Christchurch to Murchison. Fortunately, the falls cannot be seen from the highway otherwise the road would have a rather high accident rate. But a pull off into the carpark and a few lazy steps brings you to this magnificent sight. 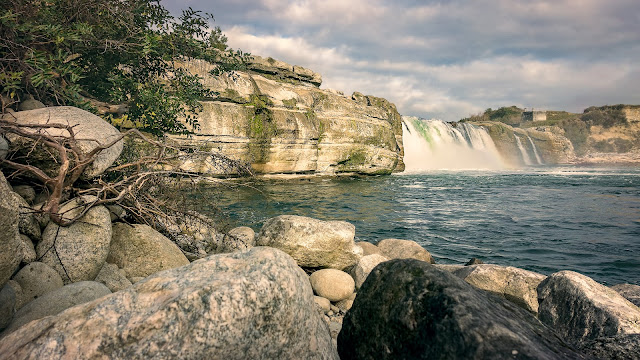 What is even more remarkable is that these falls did not exist prior to 1929. In the Murchison earthquake of that year, a landslip diverted the course of the Maruia River so that it rejoined its self further down stream, falling over its own bank. At that time, the falls were about one metre high. However, in the succeeding years the falls eroded the base of the river until, today, they plunge a good ten metres to the river below.

We tend to think that such things happen over thousands of years but, in the case of the Maruia Falls it has all taken place in a rather short 86 year period. Great productivity, New Zealand!
Posted by David Ford at 8:56 PM