So, there I was today, sitting in Oxford's "Sheffield Pie Shop" and tucking into to one of their, rather tasty, apricot pies when I had one of those strange flashbacks to the mid-1960s. In the wink of an eye, I traversed 50 years of apricot pie eating to arrive at the classic apricot pie - Lyons Individual Apricot Pies. 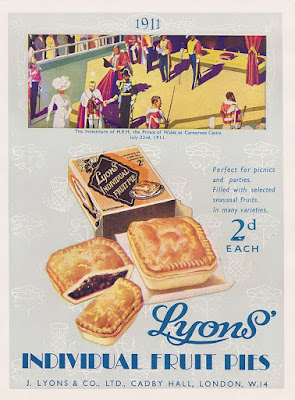 These are the pies that started a 50-year addiction to apricot pies. These pies were so special that each one came wrapped in its own cardboard box and, despite the advertisement, cost 6d each, by the time I discovered them. The cunningly shaped corners ensured you never got one with broken pastry and the tangy filling was always discoverable on the very first bite.  There were other flavours, of course, including apple and strawberry, which sometimes substituted when the apricot pies were all sold out. But the apricot pie was the best - until they were discontinued in 1968. They were replaced by a round pie, the Harvest pie, which was only a 6/10 pie, unworthy to succeed the octagonal beauty of the original.

In case you doubt my claims on behalf of this pie, just type "Lyons individual fruit pies" into Google. This search will yield over 300,000 hits - 47 years after the last one was sold! These pies, which pre-date Google, the internet and even solid state computers are still being discussed in awe-filled terms, in 2015.

If you ever ate a Lyons apricot pie, then visit the Sheffield pie shop and be transported back in time ...
Posted by David Ford at 6:39 PM