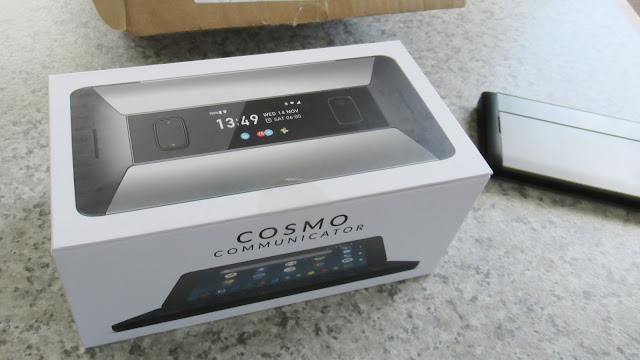 My Cosmo Communicator arrived on 18 November 2019 (Indigogo backer #24). It came configured with US keyboard and plug (no NZ/AU plug option). So, a month and a bit later, it’s time for a review.

Out of the box
Straight out of the box, the Cosmo impressed with its feel and build quality. Whereas its predecessor, the Gemini, always seemed a little ‘home-built’ with its squeaky hinge and pop-off panels, the Cosmo looks and feels more solid, with a snappy closing clam-shell and smart-looking front panel. The snappiness continues when it boots into Android Pie; whereas the Gemini always felt a tad hesitant about what it was being asked to do, the Cosmo jumps to attention and just does stuff when asked - due presumably to a better processor and more RAM. 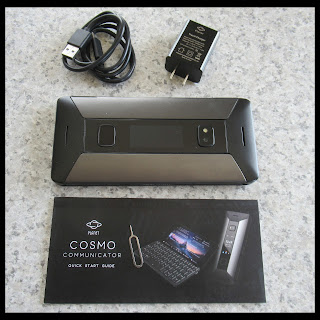 Keyboard
The positive first impressions extend to the Cosmo's main feature - the keyboard, which is now backlit. The keys have shorter travel than the Gemini and don’t have any of the Gemini’s ‘jelly-wobble’ when they are pressed. My typing (two-handed and on a desk) is both faster and more accurate on the Cosmo than the Gemini. Typing long-form articles on the Cosmo is a very doable proposition that, in my view, rivals that of a full-sized laptop.

Front Screen
The front screen on the Cosmo is a mixed blessing. It’s handy to be able to make and return calls without opening the Cosmo’s cover but, on the other hand, it represents an additional vulnerability to knocks and bumps, as well as frequent accidental activations in a pocket or bag. There were some advantages to the robust, metal-clad, exterior of the Gemini - mine even has a small dent on the front which the Cosmo may not have taken with such good grace.
In practice, the integration between the front screen and the main device can also be problematic. At times it appears very laggy and there are inconsistencies - for example, the exterior screen can remain stubbornly locked, while the main device is happy to accept a finger-print or a trust-agent to unlock. Another problem is that the external screen remains active to touch even when the main device is open and the front screen is displaying the Planet logo - this can cause problems with unintentional activations when holding the Cosmo in portrait orientation (like a book). I would expect these issues to be addressed by a future firmware update. 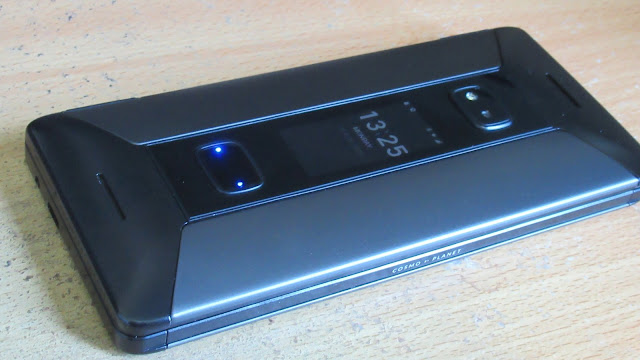 By the end of the first month, I was ready to give up on the Cosmo's front screen. I resurrected a three-year-old Samsung Gear S2 Classic watch and found, to my delight, that there were no key functions of the Cosmo's front screen that were not already present on the S2 Classic (and later Samsung watches) - especially accepting and placing calls, responses to texts and receiving notifications - all these can be done without opening the Cosmo (which was the original justification for a front screen). The smartwatch is, in my experience, a more elegant solution than a fixed screen on the front of the Cosmo and it alleviates the Cosmo's propensity to chew through the battery at a voracious rate (see below).  Be aware though, that not all smartwatches can perform all these functions - Samsung have done more than most at enabling responses to texts and calls from the watch.

Battery
Battery life is acceptable but, as others have observed, with such a large 4,200 mAh battery, we might have expected better. With everything switched on (Front processor, wireless, mobile data, Bluetooth, GPS) over the course of a day, my Cosmo consumes an average of about 4.6% battery per hour - that’s an 18 hour day from full to 15%. However, switch off the front processor and that improves to about 3.0% per hour and gives 28 hours of use before you hit 15% - and that’s similar to the Gemini. There is clearly room for improvement here: Over 40% of the battery is being consumed by the phone radio (even in standby) and a further 30%+ by the device being held awake. It seems that Planet has some work to do on battery efficiency - hopefully, we can look forward to some improvement in a future firmware update. In the meantime, Cosmo will get most users through most days. 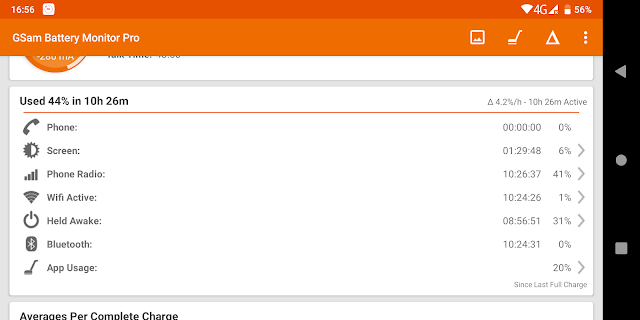 Camera
The camera takes pictures. For many people, the 24Mp pictures will be good enough. The camera makes a good job of scanning documents and recording mundane events and places - things that I missed with the Gemini. As someone who regularly uses quality camera gear to produce landscapes and nature pictures, the Cosmo's camera was never going to be good enough for my photography needs. Ultimately, the Cosmo camera suffers from aggressive noise reduction and compression that smudges fine detail (like grass and hair) and can make a blotchy mess - even in good lighting. Things improve somewhat if you install something like Open Camera which, in some of its 13Mp modes using the Camera2 API, produces better images than the native app does at 24Mp. Nevertheless, there are numerous small sensor camera modules available on cameras from Canon, Sony and DJI that produce significantly better pictures than the module on the Cosmo and, in this sense, the Cosmo camera can only be considered a disappointment.

Daily use
I run stock Android and have no interest in fiddling around rooting the device or installing various flavours of Linux. My experience is that the Cosmo (and the Gemini before it) make acceptable Android devices but, judging by the comments of other Gemini users, the experience goes downhill fast as soon as you start messing with rooting and multiboot. Tales of unbreakable boot-loops keep me firmly planted in the Android space - life is too short for that sort of hassle.
The extent of my customisation is to replace the stock Cosmo launcher with the Nova launcher which I have used on various devices over the years. It’s clean, very customisable, and I trust it. With Nova installed, the Cosmo seems to run flawlessly, day in and day out. I run my favourite Android apps but do not use Planet’s supplied email, database or notes. In my view, they are just not in the same league as the best Android apps on offer in the Playstore.
Until, the latest firmware update, the Cosmo would randomly flick back to the lock screen when it was being used. The firmware update has fixed this annoyance and, aside from the aforementioned issues with the front screen, I find that there are no significant problems in daily use.

Not for everyone
Having said all that, the Cosmo, and before it the Gemini, are not for everyone. If you are happy with a slab of plastic and glass for a phone and don’t hanker after a proper keyboard - perhaps because you don't mind carrying a laptop or a Bluetooth appendage - then give the Cosmo a pass. The Cosmo (and before it the Gemini) are aimed at a particular type of user - one who wants a single, pocketable, device for all their day-to-day mobile needs. A device that allows them to phone, message, email, write at length, poke spreadsheets around, listen to a few tunes or watch a movie or two - that's Cosmo. 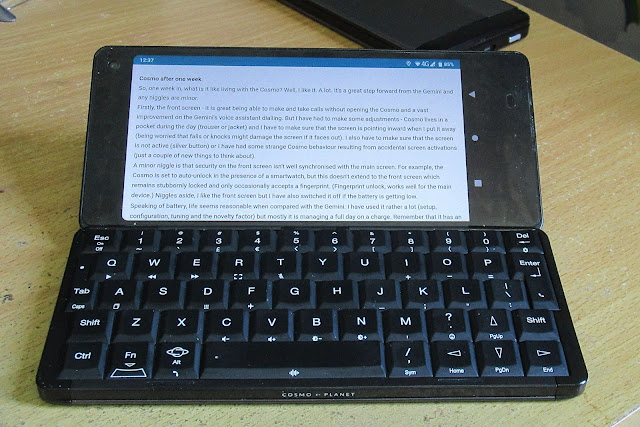 Think of it like this; If phones were cars, Apple, Samsung and others would make good, solid, daily drivers, but Planet Computers would make something like a Morgan - the Gemini an iconic Morgan 3 wheeler while the Cosmo would be the latest V6 Roadster. Most people wouldn't want a Morgan as a daily driver and most people probably won't want a Cosmo either. But, for those who do… well...nothing is going to put a smile on a driver's face quite as quickly as a drive in a Morgan, or the feel of a real keyboard under your fingers with the Cosmo Communicator. Well done Planet Computers!
Posted by David Ford at 1:55 PM