It's time New Zealand had a new flag but ...

Flags are important; you don't get to change them every five minutes. So, when we do change our flag, for most of us it will be our 'forever' flag. The single flag on offer next month (above left) is nice, but is it a lasting design? Will we be looking at it in 20 years time and wondering who on earth thought that was a good idea? Will our kids find it an embarrassment? It looks to me like a flag that's trying too hard.

The process we went through to get here could have worked, but the Flag Consideration Panel didn't do a good job. Of the four options they gave us (out of the long list below) three were based on the silver fern and one had a koru design. The one koru design offered, was a bland black and white version - by no means the best of the many koru designs offered to the panel. The panel should have offered us the best four flags presented to them but they didn't. One doesn't need to be a cynic to think that the deck was being stacked in favour of a fern. Perhaps the subsequent furore, and inclusion, of the red peak flag, was tacit recognition of the Panel's bias.

Given the limited, carefully chosen choices, available in the first referendum, it was hardly a surprise that a fern came out in front, and hardly surprising it was a Karl Lockwood design (they were indeed the best of the ferns, in my opinion). At the end of the day, the main choice was between a red or black top left colour. Black won.

So here we are at a choice, to keep the current flag or adopt the black, blue and white fern. The fern is OK, but does anyone really think it's the best we can do, or even the best in the panel's long list (below)? If so, then by all means vote for it. As for me, I think we deserve better. I think we have been denied better and, if we can't have the best, then I'll be voting to stick with our existing flag. That way we might get another chance in maybe five years to choose our forever flag - one we can be truly proud of. 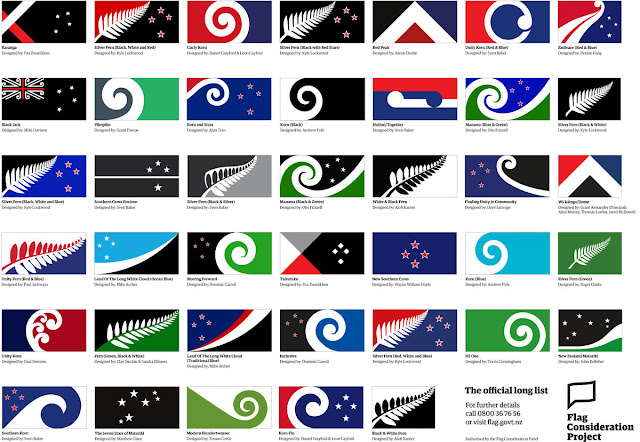