The courier is due today, bringing an old camera which could either be a bargain or a bust. Well, perhaps not a bust, but at worst a non-working display item. To be fair, I paid a display item price but there is still that hope of an inexpensive, working, camera worth, perhaps, 3-4 times what I paid.

The camera is, I believe, an "Ensign Selfix 820" - a British camera from the mid-1950s. The seller simply described it as a "Vintage / Old Camera Comes out at front in leather case". Now, either he doesn't know his vintage cameras, or he is a wily trader casting a fly. My research leans towards the former, but not with any great degree of certainty. So, a bargain or a bust? I should find out today. {continued later} 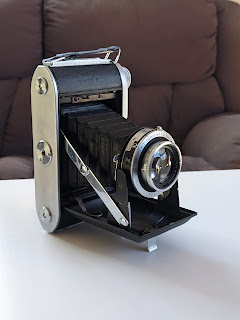 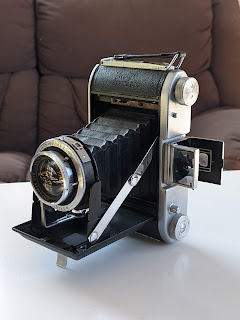 Opened the package with some trepidation and found inside an Ensign Selfix 820, as suspected. Cosmetically, it is a beauty; not a mark on it and all the leatherette looks pristine.  "Made in England" (you don't see much of that these days) proudly engraved on the winder knob and all distance scales in feet. Opening up the back, I find the two masks inside that convert the camera from 6x9 to 6x6(cm) both present and correct, as well as some minor rust spots on the film rollers which I will attend to later.

The big worry, in my head, was the shutter; but it works at all speeds including 'B' and 'T'. Accuracy will have to be determined later. There is haze and some small fungus marks on the lens, so I take out the rear element and give the lens a good clean - all becomes crisp and clear. The bellows seem to be in good condition with no light leaks but a roll of film through the camera will soon confirm that.

This camera is as close to "mint" as any used 60-year-old camera can be, and the value according to Collectiblend is about US$250; I paid US$50 or about 1/5 of the going price. So, I'm calling "bargain" on this one.