Out of sight; out of mind

As a visual sort of person, I identify strongly with this old adage. If I can't see it, it probably doesn't exist. Papers belong in stacks on the desk or shelf - somewhere I can see them but definitely not in a filing cabinet. Clothes only belong in draws while waiting for the next season and my cameras lay in wait in various nooks and crannies around the house.

So it was, with a growing awareness that I needed to be a more tidy Kiwi, that I was on the lookout for a glass-fronted cabinet for my camera gear. And behold, in the fullness of time, one came my way, unbidden, and I started to place my cameras therein. 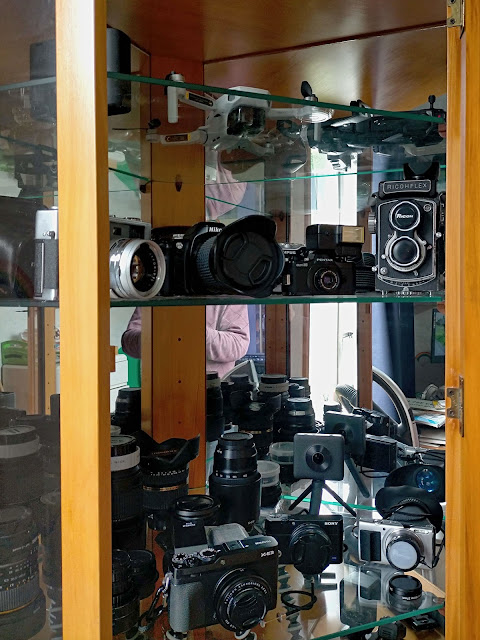 If you had asked, prior to the cabinet, how many cameras I possessed, I would probably have said, "three or four" (I had recently been through the trauma of selling one, so I knew the numbers were down). But, as I placed the twelfth camera in the cabinet, I began to see the problem: I'm a collector/addict (depending on who you ask). Six of these cameras are film cameras - one of which I brought only last year; all bar one have been used in the last twelve months, two still have film loaded.

Now that I can see them all, I am more mindful of my camera obsession: in sight; in mind (perhaps I should keep them in boxes after all?)
Posted by David Ford at 3:39 PM