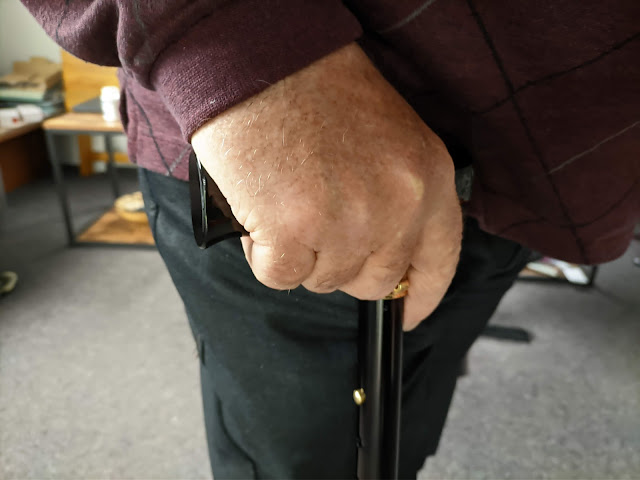 I now possess a walking stick. Not one of those flashy carbon-fibre, "I'm climbing a mountain," sticks but one of those grippy-handled, "I'm having trouble standing up" ones.

Annette brought it for me after my first slow walk along the street, following The Incident. "I'm stopping at the chemist to get you a stick," she said. It wasn't a question.

I could have argued but, after thirty-eight years of marriage, I have learned that arguments are like flowers. Some are pretty to have and are conducted with a hidden smile, some give you allergies and leave you with a runny nose and some, like roses, come with thorns that draw blood. If you have one of the thorny ones, you usually end up at the florist buying roses. Go figure the logic in that. So, I pick my arguments carefully. This wasn't one of them.

The stick is one of those collapsible ones; "So, you can take it in a bag in case you need it." I appreciate the thought but can't escape the obvious irony; that a device designed to help keep you from collapsing does, its self, collapse. Clearly, today is one of those 'go figure' days, designed to reinforce the whole 'life is an absurdity' philosophy.

So, here I am, a fully qualified, stick-carrying, septuagenarian; realising for the first time that one doesn't use the "help standing up" stick in the same way as the "climbing a mountain stick". How did I not know that? Go figure.