The dear lady that gave me the Kodak Retina Reflex, turned up again the other day with another gift - a camera from the thrift store where she works. I'm warming to the idea of her bringing me a camera every now and then - I get to check the camera out, find out where it fits in the history of cameras and, if it's functional, run a roll of film through it. Nice.

The previous Retina failed the film test. I got some pictures off the roll, but the film winding mechanism was unreliable and there were gaps and overlapping frames. It could be fixed with a good CLA, but is not worth the cost (probably over NZ$300). So, with that experience, I didn't have high hopes for the camera in the case marked, "Minolta".

Inside was a 35mm, Minolta Hi-Matic 9, apparently owned previously by Ian H Thompson of Oxford. I discovered that he died in 2009 so it's probably been sitting around unused for a few years. What I feared was fungus on the f1.7, 45mm lens, turned out to be nothing more than dirt and cleaned up nicely. What was more surprising was finding that the (now obsolete) mercury coin-battery still worked, as well as the light meter,  shutter and self-timer. 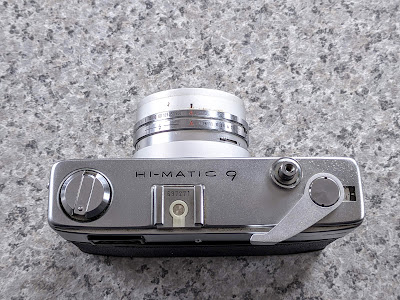 The H-M9's key feature at the time was an automatic exposure system. The camera had a light sensor built into the lens housing and, when set to auto, would calculate the correct exposure. It wasn't a particularly sophisticated system, gradually ramping both aperture and speed from 1/15 sec @ f1.7 all the way to 1/500 @ f16. If the user wanted more control over aperture or speed, then they needed to switch into manual-mode to override the auto function. Minolta dropped this system in the next model (H-M11) opting instead for a shutter-priority automatic system.

The HM9 is about to get the film treatment, and I intend to give the automatic exposure system a workout to see how it stands up in 2020.

On a different note; today I managed to get a shoe on my damaged foot. So mobility is restored and I will be spending much less time sitting in front of my computer and more time out shooting!
Posted by David Ford at 2:42 PM